On Friday evening, LCAD Gallery was the site of an extraordinary evening of literature. Grant Hier read from his new poetry collection Similitude to a packed room of fans, friends, students, family and colleagues from LCAD. For more than a decade, he served as Chair of Liberal Arts and Art History and Faculty Senate President at Laguna College of Art + Design where he remains as Full Professor, teaching courses in literature and creative writing. Hier is also the Poet Laureate of Anaheim.

A perfect venue for the reading

It seemed fitting that the site of the event was LCAD Gallery, which is currently exhibiting photos and works of art from the Shoreline Project last weekend. The theme of the project, according to the artist Elizabeth Turk, was “Searching for commonalities, we start at an essential level.”

An apt setting, Similitude means likeness or resemblance, how we match as a counterpart of another, how much we are alike and what is common to us all. 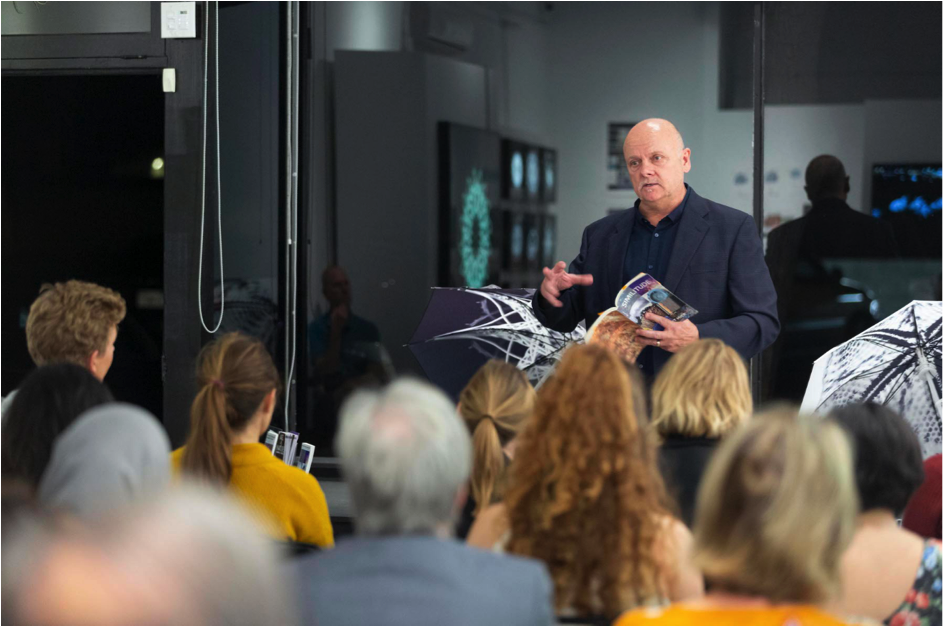 Amazon says of the book, “This collection is thoughtful, well-wrought poetry that simultaneously connects the unexpected and reveals to us places of resonance.”

And that’s exactly what his poetry does, especially when it is read by the author.

”What I love about Grant Hier, both as a poet and person, is his accessibility. There’s no pretension in either his work or his conversation.”

Marrie Stone says, ”What I love about Grant Hier, both as a poet and person, is his accessibility. There’s no pretension in either his work or his conversation.”

It’s all about inclusiveness and his intention for the audience to be a part of process that he experiences while he reads his work, and he graciously invites us in.

Hier says of the evening, “I love it when literature is released through the human voice and sent out into the sky, and I specifically love the live readings that Bryan Heggie has brought to the LCAD Gallery in downtown Laguna. To read poetry to one’s self stimulates the mind and imagination, of course, but to hear it read aloud entertains the ear, and makes the body resonate, too. And speaking it out loud involves all of that, plus the breath, and the mouth, and more. That’s when you really experience poetry as the music that it is. I love it.”

How music plays into the mix

In addition to writing, he is a musical artist, visual artist, graphic designer, and former art director. He recorded his original musical compositions for A&M Records in Los Angeles, and his installation art has been featured in several gallery showings.

What type of music does he listen to? He replies, “I listen to a lot. On Saturday I’m heading to Royce Hall to hear a choral piece by my favorite living composer, Arvo Pärt. When I paint, he’s usually the soundtrack. When I grade, if I want music on, it’ll be Glenn Gould playing Bach’s Goldberg Variations. I love Jeff Tweedy, Margaret Glaspy and Elliott Smith for their unique songwriting, their chord progressions, their guitar playing. Grizzly Bear. Kendrick Lamar. The Beatles. Motown. I used to work in music, and being exposed to a wide variety of styles and genres really broadened my horizons and tastes. Travel does that too. As the one aphorism from Similitude that I read on Friday points out: ‘When you are a lover of diversity and newness, the world is ever beautiful.’

”Of his poetry, Jeff Rovner comments, “A Grant Hier poem is like a joke well told: surprising, yet inevitable.”

And it appears that Hier agrees, “Plus, it’s always fun – and often surprising – to see which poems and lines most resonate with people. If anyone is willing to let me know (via my website or social media links), I’d be delighted to hear their reactions to my work. I actually use that feedback in selecting poems for readings. At the book launch on November 9, for instance, I included every poem that Lynette Brasfield and others had mentioned were their favorites.”

Hier with some of his creative writing poetry students and Louie Pérez (on the far right) of the band Los Lobos. Hier is collaborating with Pérez on a couple of projects soon to be announced. | (Photo courtesy of LCAD)

Awards and what poets inspire him

During his career, Hier has garnered many awards. He was the 2014 recipient of Prize Americana for his book Untended Garden, which was published by The Poetry Press in 2015, and nominated for both an American Book Award and the Kate Tufts Discovery Award. He was awarded the Nancy Dew Taylor Prize for Literary Excellence in Poetry in 2014 for his poem “The Difference Between Rattle and Settling,” and the Kick Prize for poetry in 2013 for his poem “Between Ellipses.”

When asked who his favorite poets are, he gives a short, medium or long answer. Of course, I take the long one.

“That’s like asking my favorite food! I love so many, really, and for different reasons. But the ones I keep going back to again and again are Kay Ryan, Wendell Berry, Robert Wrigley, Galway Kinnell. They nourish and sustain me.”

“Louis MacNeice and Brigit Pegeen Kelly I love for their masterful phrasing. Sharon Olds and Mary Oliver for being unapologetically direct. Pattiann Rogers always delights with her imagination and surprising turns. Walt Whitman and Robinson Jeffers have always connected for me with their compelling ideas. I love them all.”

"When you are a lover of diversity and newness, the world is ever beautiful."

Hier received the high honor of Prize Americana for his book-length poem Untended Garden (The Poetry Press, 2015), as well as The Nancy Dew Taylor Prize for Literary Excellence in Poetry (2014), and the Kick Prize for poetry (2013). His poems have been widely published internationally, and anthologized in such places as Human and Inhuman Poems (Knopf/Everyman), Poets Against the War, and WTC Remembrances.

What’s next? Among many things, in 2019, Hier’s book California Continuum, written with John Brantingham, will be published. And as any person who searches out both the universe’s diversities and similarities, it appears that Hier fully embraces both and brings us into that world.

As Hier says in his poem “From a series of Marking Stones: To,”

To lose the map is to gain adventure,

one and the same,

With Hier as the poetic maestro, it was an evening full of adventure and the collective resonance of emotions.

Of family, gardens and impermanence